There aren’t that many Christian or biblical based games out there, and the ones that do exist…well, let’s just say there are reasons you likely haven’t heard of them. I recently found a website where you can play old games that no longer can be purchased or are very rare, and they had a “religious” section. Curious, I checked it out and this was one of the available choices.

Captain Bible In Dome Of Darkness was released in 1994 for MS-DOS (oh yeah, we’re going back!) by Bridgestone Media Group. It’s a sci-fi game about Captain Bible who is sent on a mission by the Bible Corps to rescue people in the Dome of Darkness who were deceived by lies from cybers (robots). The game is simple, you gather bible verses scattered throughout the area and when you meet an enemy, you chose the right verse to combat their lie. You use your sword of the spirit and shield of faith to do battle. That’s pretty much it, not much else to it. 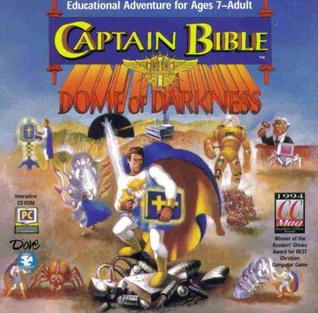 In all fairness, I only played for about 20 minutes but that was enough for me to turn it off. You can tell that I am not a fan, and mainly because it’s slightly frustrating when Christians make bad art. My opinion aside, for it’s time the graphics weren’t that bad but I would have liked better sound effects. The game was actually kind of difficult, because if you chose the wrong verse to counteract the lie then your faith meter goes down. Once it hits 0% it’s game over.

I won’t be returning to this one, mainly since it’s so dated. Reading the bible verses in the game reminded me that regardless of how it’s presented, God’s word is always convicting, teaching, and gathering us closer to Him.

Get my newest posts to your inbox!

Took a few minutes to figure out but I learned how to download my short clips from #PS4 that go to Twitter, and use Hoot Suite to post on my instagram. Oh technology...I'm often a few steps behind you!
Got more manga! This time its all Mega Man.
Matthew wrote a review on #WhatTheGolf? which is all about golf, silliness and a good time. Definitely check it out on #NintendoSwitch
My PS3 collection. Its not that big but wanted to share it with you all, and some of my thoughts on them.
I'm joining again with @christian_geek to help fundraise for @StJudePLAYLIVE
I am enjoying my growing collection of manga! Here’s the latest edition.
My Tweets