This last week has been pretty big for the world of gaming. Despite the COVID-19 pandemic creeping across the globe, gamers have still been able to reap the fruits of two new AAA titles. To the chagrin of the fans, these two games are so different from each other that they have spawned a meme revolution. Both Animal Crossing and Doom Eternal came out on the exact same day, and social media took notice long before it happened. You could hardly get on Twitter or Instagram without seeing vast amounts of Isabelle and Doomguy crossovers. It really is quite the sight to see cute video game characters with the most hardcore.

Many gamers already had their alliances chosen when the two games dropped. Quite a few of my Christian brothers and sisters immediately hopped onto the Animal Crossing train, ready to build their perfect island getaway. I was surprised, however, to see some fall hard and heavy into the action-packed, yet gore laden world of Doom Eternal. As an old fan of the franchise myself, I always distanced my faith from my personal enjoyment of demon-slaying. But did I have to? Could followers of Christ actually play violent video games like Doom with a clear conscience?

This is not a new question. As video games have evolved over the years, many Christians have been confronted with the fact that many great titles are actually quite violent. Back in the late ’90s, many young men and women of the faith had to try and convince their parents that Goldeye: 007 was an appropriate game to bring into a Christian home. The sight of a secret agent mowing down bad guys left and right with automatic rifles gave parents fears that their child would be involved in the next Columbine. So for the next 20+ years preachers and teachers of the Word have been trying to lay down that line; when does violence within games become too violent?

A Look at Christian Liberty

Believe it or not, this question of what a Christian can do outside of what is Biblically mandated is found within the Scriptures. Paul himself was confronted with this very question when he addressed an issue that was occurring within the Corinthian church. You see, many of the church members were going to the local pagan temples and receiving the leftovers of offerings that were given to foreign gods. This behavior mortified many within the church, and they spoke against those who were partaking in the food. Not wanting there to be any division among the church, Paul responded with what is said in 1 Corinthians 10:23:

What we have here is a perfect example of what is called Christian Liberty. This is basically the “grey area” which covers everything that is not spelled out in the Scriptures. Since we now live in an age of technology and bioethics, we have found ourselves living within Christian Liberty even when we have not readily acknowledged it.

On top f that, we also live in what is called “the Age of Grace,” which is the time period after the covering of Jesus’ sacrifice. This is a time in which God no longer uses mass genocides and global disasters to reign his people in. People can now choose to follow God or to not.

It is for that reason why Paul says “I have the right to do anything,” because, during this age of grace, we really do. So, if a Christian really wants to play Doom or other violent video games, they have the ability to do so with a clear conscience. However, there are always consequences to every action, and that is spelled out by the next part of the verse which says that not everything is beneficial or constructive.

The Consequences of Perception

I recently read a Kotaku article by a journalist who spoke to developers who were involved in creating Mortal Kombat 11. As you probably know, the Mortal Kombat franchise has always showcased the most visceral of violence in any video game series. According to the article, the game’s developers had to do research in order to accurately portray the in-game bloodshed. The source spoke of developers watching Youtube videos of hangings, animals being slaughtered, and other violent acts for hours on end to get the right aesthetic for the game. Many of those men and women recounted having terrible nightmares of what they saw, and some even got physically sick.

Regardless of how desensitized you may feel yourself getting from watching gruesome acts in your video games, what goes in through the eyes will always come out in some form or fashion. This is reflected directly in the Scriptures in Matthew 6:22-23:

This darkness will start to affect the body and the soul in certain ways. I would imagine that it is different for everyone, but the truth remains that what we see is imprinted on our minds. The results will come out eventually, and they could look like anything from bad dreams to bursts of anger or the desensitization of other people’s suffering. It really could be anything.

There is another aspect to this issue that many well-meaning believers do not consider when partaking in questionable activities. I only gave part of Paul’s thoughts when it comes to Christian Liberty when he spelled it out in 1 Corinthians 10:23. Here is verse 24:

24 No one should seek his own good, but the good of the other person.

This is a huge caveat to Christian Liberty because it focuses our actions not on our own enjoyment, but on the benefit of others. In context, Paul speaks about the consumption of food offered to idols which becomes a “stumbling block” to weaker believers. For reference, this is what Paul says in 1 Corinthians 10:25-30:

25 Eat everything that is sold in the meat market, asking no questions for conscience’ sake, 26 for the earth is the Lord’s, and all that is in it. 27 If one of the unbelievers invites you over and you want to go, eat everything that is set before you, without raising questions of conscience. 28 But if someone says to you, “This is food offered to an idol,” do not eat it, out of consideration for the one who told you, and for conscience’ sake. 29 I do not mean your own conscience, but the other person’s. For why is my freedom judged by another person’s conscience? 30 If I partake with thanks, why am I slandered because of something I give thanks for? 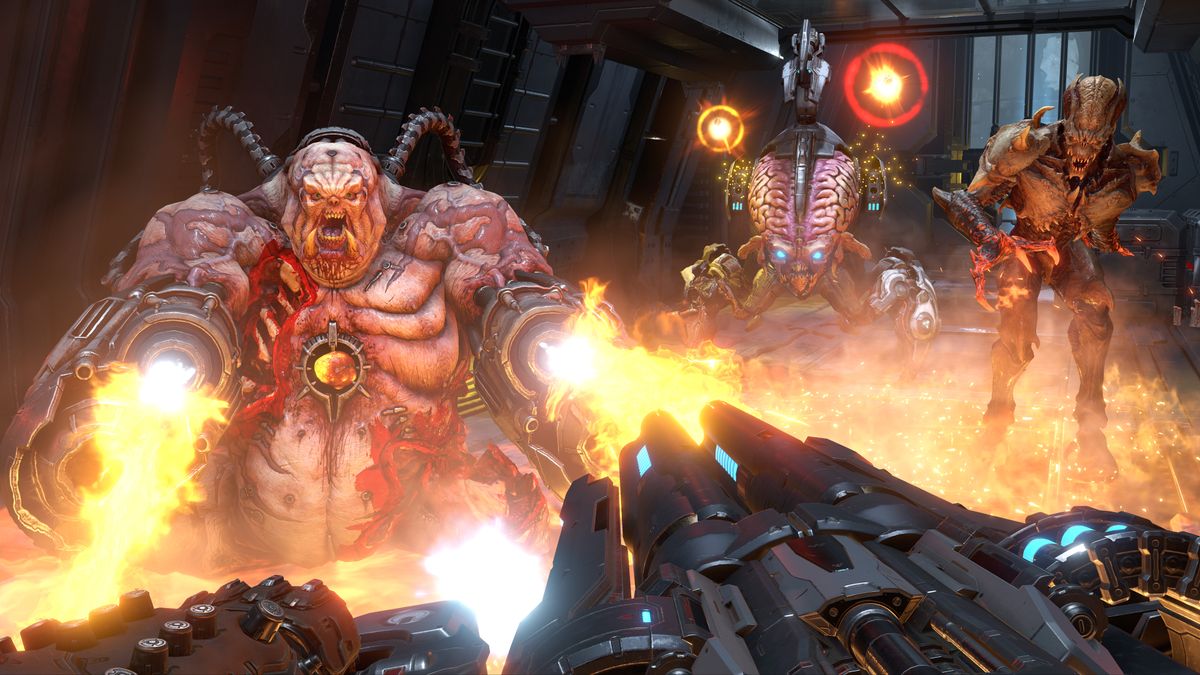 This issue may seem like apples and oranges to most people when discussing violence in video games, but the principle is the same. We have the right to enjoy whatever we want within the confines of our Christian Liberty, but others may be affected by our behavior. Say a fledging believer watches a popular Christian streamer play Doom Eternal and that causes them to question the validity of Christian morals and standards, who is in the wrong? According to Paul, its the streamer, because he or she is not keeping in the mind the conscience of the weaker brother.

I know this is a hard pill to swallow for many content creators, but you are being watched by people who may or may not have the same confidence in their faith as you do. It is good for you to consider them when deciding what game to stream because those titles are not just a reflection of your games of choice, but also a reflection of the God that you worship.

The Desires of the Flesh

Though I cannot speak for everyone who prefers the violent variety of entertainment over the more subtle, I can address the various reasons why I used to prefer them. I mentioned earlier that I used to play GoldenEye; well, that’s just the tip of the iceberg. At the age of 16 I was consumed by “soldiering titles,” Doom 64 included. As somewhat of a social outcast, I found it fun to be the hero, and I paid little mind to the violence that perforated the content of those games. I all honesty, I felt justified by being the hero in the games.

What I did not know then that I do know now is that all that confusion was brought on by something called the Flesh. Though we do have flesh and blood, the Flesh itself is actually beyond that. It is the sin nature that all people have and compels them to sin against God when they know better. In fact, the acts of the flesh are spelled out right before the fruits of the spirit in Galatians 5:19-21:

Interestingly enough, most of these actions are glorified in many rated M games today, and many times those actions must be virtually completed in order to win the game. Take it how you will, but I believe many Christians who justify partaking in that kind of media do so because it feels good. Feeding our sinful nature feels great, so we must be mindful of what is spiritually happening within us when we play these games.

So, can Christians play Doom and other violent video games? The simple answer is yes. Christians can play anything they want because of the Christian Liberty that has been granted to them. The better question is this: should Christians play those games? That completely depends on one’s own conscience and how they feel their choice of games and personal influence will affect weaker believers.

Amidily, I picked up a copy of Doom 64 for the Switch when it was released a few days ago. I do enjoy the classic franchise because the violence is pixelated and somewhat benign. I will not pick up the new Doom titles because I feel the action is way too gory. Despite this, I wouldn’t think twice about discontinuing my playing of old Doom games if I found out that it was causing someone to question the morality of the Christian faith. There are too many ideologies that stand in the way of people accepting Jesus as their personal Lord and Savior, and I am not going to allow my choice of games to create a barrier in that regard.

So, to Doom or not to Doom, that is the question. Well, let me ask you one last question: does playing Doom serve the Lord?

Allow for this final verse found in 1 Corinthians 10:31-33 to speak to your spirit.

31 Therefore, whether you eat or drink, or whatever you do, do everything for God’s glory. 32 Give no offense to the Jews or the Greeks or the church of God, 33 just as I also try to please all people in all things, not seeking my own profit, but the profit of many, so that they may be saved.

4 thoughts on “To Doom or Not to Doom”