This is a collaborative post with Hope, Play, Love which is run by Andrea which is one of our wonderful staff writers. Check out her blog as well 🙂

“For I know the plans I have for you,” says the Lord. “They are plans for good and not for disaster, to give you a future and a hope.”

These are dark times we’re experiencing right now. For the first time in a long time, if ever, people are questioning what the future holds for society. Will they still have a job? Will there be enough food to feed their families and themselves? Will they be safe?

These thoughts are legitimate, and they are terrifying.

In this article, we are hoping to alleviate some of that fear and anxiety you may be feeling right now. We’ll each be sharing a piece of Scripture and a story from a video game that we feel we can learn from in this time of uncertainty.

The answer lies right there in the Bible, God’s Holy Word – His gift for us, His children.

We hope this will inspire you and give you at least a little bit of hope during this time.

When I am afraid, I put my trust in You.

There isn’t quite as low a point in a video game that I’ve played than when you first wake up in the World of Ruin as Celes in Final Fantasy VI. After Celes and the other members of the main cast fail to stop the ‘End of the world’ and from Kefka obtaining godlike power, she and her father-figure Cid are trapped on a deserted island, with Celes being knocked out cold for a year.

Shortly after awakening, however, Celes soon notices that Cid is ill. Out of desperation, she tries to repay his kindness for caring for her by trying to save him. She tries to find food for him to quickly regain his strength and recover – every second counts, and if she gives him the wrong food, he can become weaker and weaker. Depending on the player’s actions and quality of food they find, Cid can actually die, leaving Celes behind.

In despair, and thinking she is all alone in the World of Ruin and with no other human life beside herself, Celes contemplates the thought that there is no meaning to live anymore.

She climbs up the tallest cliff she finds and lets herself fall off of it, with no hope remaining. The attempt fails, and when she awakes on the shoreline, she finds her teammate and budding love interest Locke’s bandanna, leading her to believe that he may still be alive.

Her hope is restored and determination grows within her – she will fight to destroy the evil that had destroyed the world and changed so many lives.

Celes’ moment of despair is so tangible and relatable, especially during this time when we’re nervously watching the news, and seeing our world spin quickly out of control.

The thing is, the world was never ours to control in the first place. It’s God’s.

It’s right to have precautions and to be wise in this current climate, but let’s not live each moment in fear and despair, as if all hope is lost. Because like Celes discovered, even in the bleakest of circumstances, when you don’t even recognize the world around you anymore, hope is not lost and is not gone. It is very much here, within us.

Let’s pray that God gives us the courage to press onward and look after one another until this is over and that we may continue to rest and hope in Him.

“The people living in darkness have seen a great light; on those living in the land of the shadow of death a light has dawned.

From that time on Jesus began to preach, “Repent, for the kingdom of heaven has come near.”

A lot of video games have a happy ending, where the hero gets through every peril no matter what happens. It can be the end of the world, but somehow they save the day, along with all their friends, without much harm done.

Life often isn’t like that, but then again, it is a video game so I don’t expect it to be exactly like reality is. There is a recent game that went through the fight between light and darkness differently, and that is Kingdom Hearts 3.

If you have not played the game, I will go into some spoilers, so you have been warned.

I cannot go into the lengthy story as it would take quite some time, so I will mention a specific battle that happened between Sora, the main character, and a huge tornado of monsters called Demon Tide. 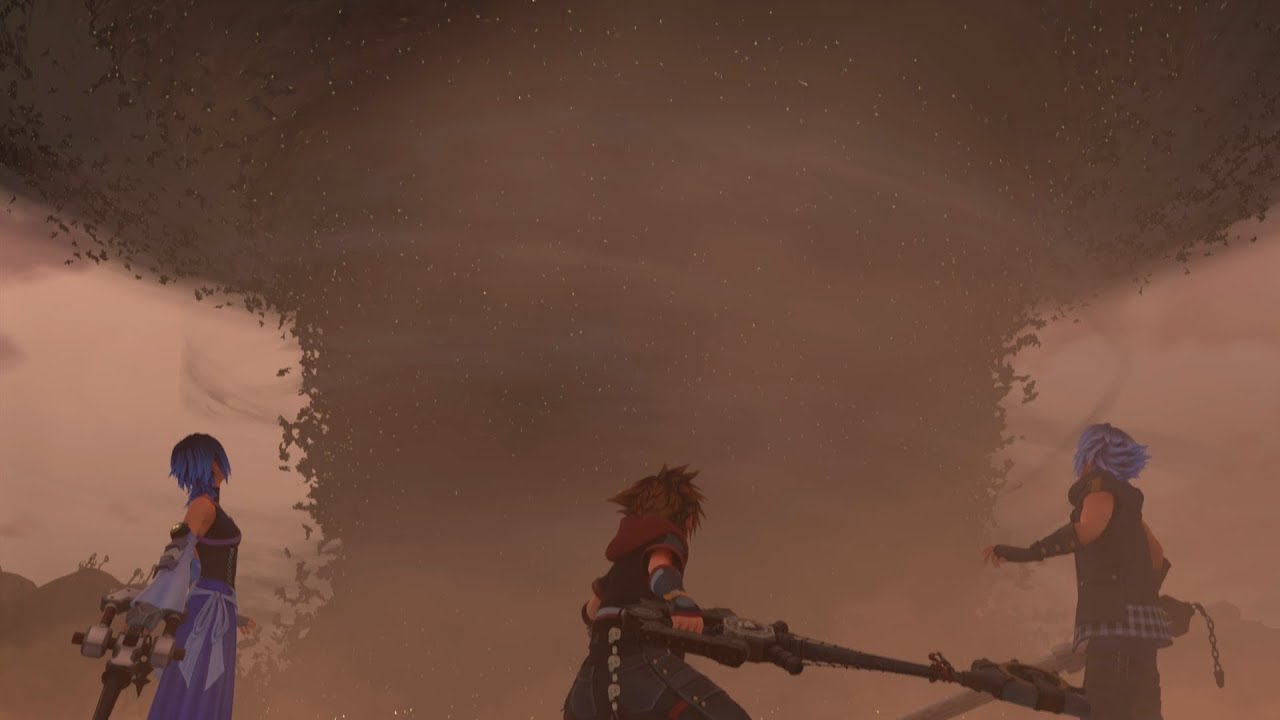 And so, as foretold, darkness prevailed, and light expired…

That’s what is shown on the screen after Sora is killed during the fight. Try as they might, the group of heroes failed to defeat this monster. They were overwhelmed and couldn’t keep back the wave of enemies, so Sora ended up going to a Heaven of sorts.

Eventually, you find your way back to this same moment in time, but you get help from past Keyblade warriors and you defeat the Demon Tide. I can’t go into a long explanation of what the enemy is, what are Keyblade warriors, or how Sora comes back. The story details aren’t my main point, it’s how Sora felt during the whole ordeal.

His boldness, bravery and his belief of light overcoming darkness came from his friends. When he lost them all and didn’t have the strength to save them, he gave up. He sat on the ground and allowed darkness to win.

During these difficult times, you might feel the same as Sora. This virus is hitting every country, state, city and even people close to you. If the sickness itself is not a concern, it may be your finances, appointments and events canceled or just fear of well-being.

How easily our entire foundations can be shaken by something as microscopic as this COVID-19, but here we are, most of us not being able to leave our homes. Schools are closed, millions are losing their jobs, and finances around the world are going down, big time.

We will come back from this though, it isn’t the end. Just as other times in history where it seemed that it was the end for humanity, there was a bright light that shined through. After the storm, the clouds break and we see what was always there, the sunlight.

Jesus Christ is still sitting on the right hand of our Heavenly Father. Earth is still His footstool, and Heaven His throne. Nothing moves Him, and He knows what we are going through. He is the one that saves us, He is our protector, and He will help those that are working tirelessly to find solutions to get them.

If you begin to feel that tremendous fear crawl up your body, declare that God is with you, He has never left you, and He is greater than any disease that comes against us. Believe and have faith in His love for you, and rest in His peace.

Look at the birds of the air; they do not sow or reap or store away in barns, and yet your heavenly Father feeds them. Are you not much more valuable than they?

Can any one of you by worrying add a single hour to your life?

Spring has finally arrived for much of the country, yet with many states and countries enacting shelter-in-place mandates, many families are afraid to venture outside in fear of the consequence of possibly doing so.

The news is all at once bombarding with information, yet making us feel even more uncertain and frightened than before, as it just seems as though the spread of COVID-19 is becoming faster and easier to contract. And there seems to be no slowing down to it anytime soon.

Stories of people raiding grocery chains, coughing on each other on purpose, and hoarding supplies are becoming all too common.

It’s easy enough to lose heart when that’s what we keep hearing day in and day out, for weeks upon end.

When I look outside my window, however, and I see new flowers blossoming and trees regaining bright green leaves, and the birds building new nests, my heart can’t help but be filled with joy.

Nature and these creatures have no idea that there’s a worldwide pandemic going on right now. To them, they’re living each day as they were designed to – and so are we.

Yes, it is good to be cautious and considerate. We need to make sure we keep each other safe from this horrendous virus, especially for those of us who are immunocompromised.

But let’s not give up and give in to fear. The games we shared, and so many more, tell great tales of heroics and courage in the face of blight and uncertainty, even death.

If we can conceive those stories from our minds and from our hearts, then I think that means that we also have the capabilities of carrying out the messages they were trying to share.

Through it all, we have a Savior who knows our every thought and concern. Instead of having thoughts of anxiety and uncertainty, we should transform those thoughts through prayer and contemplation over His Word. When we do so, watch how He transforms your heart, and indeed your whole life. You may find a peace you never thought you knew – even before this epidemic began.

“No matter how dark the night, the morning always comes.”

Excited to share my long overdue review of the Unofficial SNES Pixel book from @bitmapbooks !
I wrote a piece on my reflection of Holy Week and one of my favorite old school JRPGs, Chrono Cross. It's a bit late but hey, better late than never!
This is real. This is NOT a drill. KH4 is coming…and the world will smile.
Yes I would like to save my progress.
It's been a while but I got around to updating my Retro Gaming Club column! Got 3 old school games for you to check out.
We are finally getting a new entry in the Valkyrie series. I thoroughly enjoyed the first game, and I hadn't got around to playing the second game, Silmeria.
My Tweets