I was recently contacted by one of the main editors over at Geeks Under Grace to write a little something on my previous time as a writer for them, in honor of their five year anniversary. This inspired me to make a sort of *best of GUG* post of my own articles while I was there and also a bonus thank you to them.

Rejoice always, pray continually, give thanks in all circumstances; for this is God’s will for you in Christ Jesus. 1 Thessalonians 5:16-18

When I first had the inspiration to begin writing on this blog and just in general, I discovered Geeks Under Grace around the same time and was blown away. I really thought that no one else (or at least very few) had thought about writing about their faith and videogames or other geeky subjects. To my excitement, there was an entire community already growing rapidly at GUG.

I had to get it on the action and was persistent in asking Drew, the creator of GUG, if I could join as a writer. Mind you, I had little training or practice as a writer except that I wanted to do it and had lots of ideas to write about. Given the opportunity, I took to task and started to get the digital ink flowing and creating content. Shortly after, I started this blog, Gaming and God, to share my posts along with anything else that didn’t quite match the articles being produced at GUG. 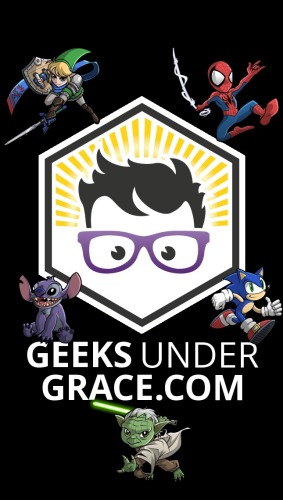 After 2 years of being on staff, the commitment to their writing quota and this blog was too much and I had to give one up. I said my good-byes and thanked the generous staff for helping me develop into a better writer and supporting my articles.

It’s been 5 years since they opened their digital doors and been a blessing to the geek community. God only knows all the hours, money, effort, management and other tasks that go on for GUG to be a lighthouse for those that need it. Not only that but always keeping up to date on anything geeky and doing it with excellence.

Colossians 3:23
23 Work willingly at whatever you do, as though you were working for the Lord rather than for people.

So I wanted to publicly, once again, say thank you to Geeks Under Grace for opening their doors to me and allowing me to be a part of their staff. I was able to meet fellow geeks in Christ and still keep in touch with them, along with helping me grow as a writer.

I pray that they will continue to be a lighthouse to those that need Christ, sharing the gospel and love of God to the lost. I also pray that whatever plans they have according to God’s will would come to pass and that the presence of Christ would be over their ministry.

Below, I listed some of the best articles that I have written for them along with my author page. Let me know which you liked the most 🙂  God bless.

See all my posts from GUG here.

Some of my favorites below:

What Video Games Should Christians Play?

Why  Christians Should Play Video Games (With Discernment)

Level Up Your Faith

GAMERS!: Why I Wouldn’t Join The Club

My Open Letter To The Non-believer

When God Showed Up At Supercon

One thought on “Gamer’s Journal: My Personal Thank You To Geeks Under Grace”