Video games are not cheap! There are not many activities that cost more to indulge over time than this one. I know what I’m talking about, being a gamer for over 20 years already! When a game is released, especially recently, it often costs $60 and then there’s the collector’s edition which could be $100 or more, or some DLC (downloadable content) that doesn’t come with the game.

Every gamer wants their favorite new title that was just released, but unless you’ve got tons of money lying around then it isn’t easy to buy them all. I have found that there are ways to still enjoy lots of new games, but still save money on them. These methods may not be the most exciting or they might just be common sense, so use whichever works for you. I am not an avid collector of games, nor am I able to play them all (I wish!). Unless God slows down time so it won’t pass so quickly, I’m aware that I won’t  be able to play every single game I want till I beat it. There just aren’t enough hours in the day, and as I get older and responsibilities or important projects pop up then that eats into my gaming time. I’m not complaining about it, just stating the facts.

So let’s get to the main three ways I save money on video games, shall we?

1) Wait for the price to drop

This one is pretty obvious, but emotional buying will hinder you from noticing. Most games are released between $40-$60 currently. Sure, there are games that are $20 or less, but I’m talking about AAA titles (games that cost a lot of money and marketing to make). It could be the newest Assassin’s Creed, Call of Duty, Tomb Raider, or sports game, whatever franchise is releasing their newest installment. Avid fans will snatch them up with a pre-order or day one of it’s release online, but if you wait a few months they often drop at least by $10 to even $20.

For example, I wanted to buy Tekken 7 when it first came out because I’m a fighting game fan, but it was $60. I waited like 6 months or so, and got it for $20 and it included some free DLC. I still enjoy playing it, and I was busy playing other games while I waited for the right time. I believe it went down to that price earlier than when I bought it but that’s the price I got it for.

2) Play and complete games that are in your backlog!

Again, this is common sense, but I have heard several gamers who just keep on buying games but then never actually play them! I’m sure many of you reading this have at least 3 to 5 games you’ve not even played yet, but you bought them either online or physically and they are gathering dust (or “digital dust”). It’s happened to me, that I get some free games from PS Plus every month and never even try them out! Eventually, I sort them out in folders and start playing them, to see if I enjoy them or just drop them for another one.

There are tons of fun experiences in games that you are missing out on if you don’t play those games. Especially the ones you paid money for, so instead of buying the latest (insert game title _________), play the ones you already have. In this way, you are combining both strategies and are waiting for that game you want to drop in price.

3) Check different stores, or buy it on Steam

Video games don’t often change their prices depending on the store you go to. Since they are produts that sell so well, stores like Walmart, Target, GameStop, or Kohls won’t lower prices immediately. That doesn’t mean there aren’t deals that you should pay attention to. One website and twitter account that I pay attention to is Cheap A** Gamer. I don’t appreciate the name, but they post deals daily on games from every console. Check them out and you are sure to find a good deal there!

Another way to save some scratch is to buy the game on Steam. Now, before you say you are not “PC Master Race” or play PC games at all, just give it a try. I was the same way, until I thought I would just see what the big deal was and download steam. I like to get indie games there that are often way cheaper than physical copies or at a store. Since they have deals every single day, it’s hard to keep up with all sales. I recommend adding the games you want to buy to your Steam wishlist, and then they are on sale you get an email and you snatch them up! Often, games that were $30 to $40 will drop to $15 or even $10. It’s worth a look, and your wallet will thank you. 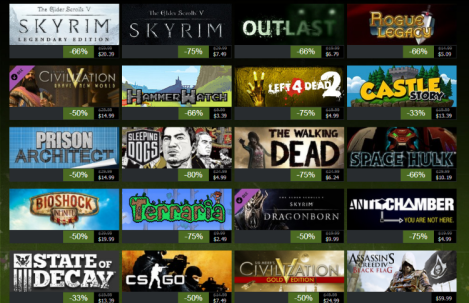 That’s it! What methods do you have to save money on buying games that I didn’t metnion? I am always looking for ways to save, so drop them in the comment section below. God bless, and keep on gaming.

Luke 14:28-30
28 For which of you, intending to build a tower, does not sit down first and count the cost, whether he has enough to finish it— 29 lest, after he has laid the foundation, and is not able to finish, all who see it begin to mock him, 30 saying, ‘This man began to build and was not able to finish’?