This is part three of a three-part guest post series on gamer motivations.  Check out part 1 on escapism, and part 2 on challenge.

In the past two articles in this series, we’ve talked about how people play games in order to tap into their innate desire to create, explore, and utilize their talents and abilities.  Today I’d like to take a look at another gamer motivation that once again finds its origin in our nature as image-bearers of God: a desire for community.

God himself is an embodiment of community; the three persons of the Trinity – Father, Son, and Holy Spirit – live together in perfect union and harmony.  When God made mankind, he decreed very quickly that it was not good for one man to be alone, and so God created another human to give the first one company.  We are hardwired for community, foremost with our creator, but also with one another; our human relationships take many forms (professional, family, friendships), but at the core of all of them is a desire to share our lives with other people and grow close to each other.

Gamers are no exception; for many people, games are a way to bond with others.  There are a variety of ways that gamers do these things, so let’s examine a few of them in some detail.

Perhaps the most obvious way of building community through gaming is by playing games with other people.  If you talk to gamers my age or a little older, you’ll likely hear many stories of people in their youth sitting in front of the TV at home with siblings, neighbors, or other friends their age and playing video games together. They would pass off the controller so that everyone gets a chance to play (or hogging the controller if they were in a particularly selfish mood).  These gamers will also likely recall times when they and their friends carried their game consoles or computers to a friend’s house, linked them all together, and held LAN (Local Area Network) parties.  Arcades were once a common element of gaming culture, where groups of people would gather to play games together, but even today, long after arcades have faded from the gaming scene, you can still find people gathering together to compete in fighting game tournaments across the world, including EVO, a massive annual tournament held in Las Vegas.

As technology has advanced over the years, online gaming has transformed how we play video games with others, for better and worse.  The great part about it is that we can now connect with people from all over the world, which lets us find online matches quickly.  We can also find communities of people online who are eager to talk about their gaming experiences with others, and in some cases, share their online IDs so that they can team up with friends they’ve met on the web.

The unfortunate aspect of online gaming is that the cover of anonymity it provides is often misused.  Since you often do not know the people you are playing with and cannot see their faces, it is all too easy for people to denigrate their fellow players without fear of any significant repercussion.  Game companies have worked hard to try to figure out how to combat this, using various reporting systems and algorithms to weed out the toxic players from the rest, but it remains an ongoing problem.  Female gamers in particular face a lot of discrimination from their male counterparts, leading many to mute their microphones or avoid multiplayer games altogether.

Even in the realm of single-player video games, community still exists.  Gamers who spend most of their gaming time delving into solo experiences often seek out other gamers on forums like Neogaf and Reddit in order to share their passion for gaming.  Some of the most thought-provoking and insightful games on the market are single-player games with deep story and character development, and these games help drive countless online discussions amongst the people who play them.

The world of board gaming is inherently very social, as the vast majority of board/card games are played face-to-face with people you know.  Families, church members, and other groups of friends spend time playing games together, whether those games be simple party games like Apples to Apples, or more complex games such as Settlers of Catan or Dominion.  A group of people playing through a campaign in Dungeons and Dragons will meet together on a regular basis to raid dungeons, complete quests, and vanquish mighty foes (in my own personal experience, D&D is one of the best games for meeting and building relationships with people, as it requires you to interact with the people in your group for hours at a time, cooperating with one another to complete objectives).  And while most board games are played in person, the advent of the internet has expanded the board gaming scene, as there are now programs you can use which allow you to play virtual board games with people online; we’ve already been using virtual board games as a part of our ministry at Gospel & Gaming in order to connect people and expand our community. 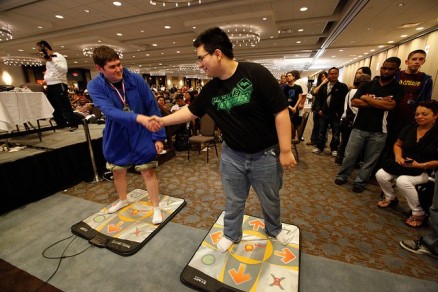 Community.  Escapism.  Challenge.  These are just a few of the reasons why people play games, but understanding these motivations helps us understand people in the gaming community, and perhaps gives us a little more insight into ourselves as well.  My prayer is that these articles will equip you to better love the gamers that God puts into your life, and that His Kingdom be expanded ever more into this largely unreached group.