*Click the above link to finish reading the article!*

When I think of Easter, I do not imagine rabbits and eggs. (Rabbits are mammals, so how did eggs get involved anyways?) To me, Easter has always been, and will be, about the resurrection of Christ. The core of Christianity is that Jesus Christ is no longer on this Earth, but in Heaven sitting on the right hand of our Heavenly Father. There are many movies, books, plays, and TV shows that portray what happened before and after His resurrection, but when it comes to the medium of anime, there is barely anything. Japanese animation has little to nothing to offer in regards to the earthly ministry of Christ, but one noteworthy anime short has been produced. My Last Day is a powerful short film by Barry Cooke, who was a former Disney animator, and Studio 4C, who created the Animatrix, and features some beautiful animation. The characters look realistic and the voice overs are professionally done for the whole nine minutes of the video.

Anime is something special because certain animations are difficult or impossible to do with real actors. When showing the crucifixion of Christ, you can see every detail, from the sweat on his face to the nails going through his hands and feet, up close. The facial expressions and screams lend to the agony that He took for us all, which I think the anime medium gives a new perspective to. Christians can benefit from viewing anime because it tends to tell deeper and more controversial stories. Cartoons here in America are made to be silly, funny, and kid-friendly, but anime is often for a more mature audience. There are deep correlations to emotion, spirituality, life, and fantasy that are not found in other media (except, perhaps, books), so I hope more anime will be released that will give us glimpses of the history of the Bible. 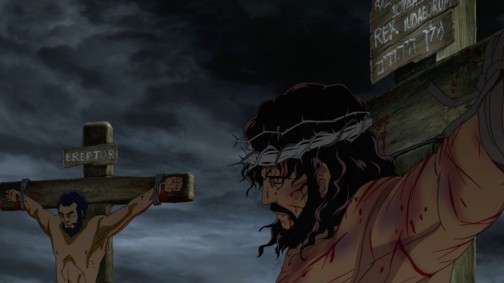 I have used this video in a panel at an anime Con because of the impact it has. It shows that any medium can be used to show us the passion of our Savior and the pain he endured on the cross. The Bible is neither a work of fiction nor something nice to tell people about, but the story of an ultimate sacrifice that saves us all from hell and gives us eternal life. There are many Christian illusions to God, the Bible, its values, and Christ, within the anime medium, but the literal resurrection of Christ is not a topic that has been seen in anime until My Last Day. Perhaps the reason is that Japan itself has very few Christians and churches, only following the Christian ritual of marriage in church, which is common. People with a personal relationship with their Creator are hard to find, so anime more often reflects a Buddhist or Shinto religious context than a biblical one. I do hope to see more short films, or even entire seasons of anime, about biblical stories that today’s audience would enjoy.

*Click the above link to finish reading the article!*