Romans 12:19
19 Dear friends, never take revenge. Leave that to the righteous anger of God. For the Scriptures say,

“I will take revenge;
I will pay them back,”
says the Lord.

I’m going through the Assassin’s Creed II trilogy set at the time of this writing, and it’s a great game! I played and beat Assassin’s Creed III and I really enjoyed it. Put in over 20+ hours in that sucker. In regards to part II, I love the environment since it’s Italy and the accent is nice to listen to. I think that’s why this one is one of the best in the series because of the setting, character development and story. It’s a true story of revenge and getting back on those that hurt you.

Ezio has been through things that most people have never experienced. I don’t know what it’s like to lose my family the way he did, and the anguish and anger he feels is palpable throughout the game. Now, I honestly haven’t finished either the main game nor the two expansions but I noticed an obvious yet powerful theme of the Assassin’s Creed franchise, revenge. 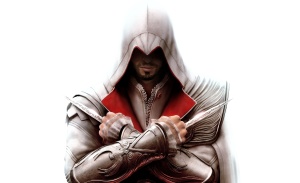 How many times have we wanted to get back at the people who have done us wrong, or have marked us with traumatic experiences? Ezio and the other Assassins have the ability to actually strike back, and give some well deserved pay back! Yet, is that what we should be striving for? As people, is our goal to hurt those who hurt us first, because they had it coming? No, you have to check your motives and see why do you want to take vengeance on others. There’s no need to go down that road, but many choose to do so and either end up hurting their own relationships, break the law, or finish with regrets.

13 Make allowance for each other’s faults, and forgive anyone who offends you. Remember, the Lord forgave you, so you must forgive others.

Of course, it wouldn’t be an Assassin’s Creed game without vengeance, because that’s the assassin’s way! It would actually be a very boring game. Life isn’t a game though, so while you live out your days on this beautiful place we call Earth, be sure that you forgive those that do wrong to you. God’s Kingdom is completely backwards to the natural world. His ways don’t make sense sometimes, because it’s not what we are taught to do.

Yet, if we follow His commandments and counsel, our life will be blessed. Instead of having to deal with so many problems, we can avoid them. This life will always have problems, I have them and so do you, but we can chose to not get involved with quite a few.

I hope that every day, wherever I am or wherever you are, we can chose to forgive and not take revenge. Let God deal with that.

Have you been in a situation where someone did you wrong or they were the at fault party and you were blamed for it? How did you handle that situation?