If you watch anime, you’ve seen Fullmetal Alchemist (the first one, not Brotherhood).  Shame on you if you haven’t…Either way, it’s a great anime with memorable characters and a plot that will suck you into it’s world of alchemy, mystery and adventure.  I’ve seen this anime years ago when it first came out, and I’ve always enjoyed it.  Colonel Mustang is my favorite character, and I actually learned how to snap my fingers because of him (I watched carefully how he did it, then practiced and I got it!).  Proof that you can learn by watching anime! 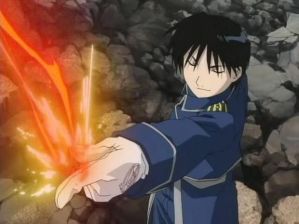 Spoilers if you continue reading After Ed and Al did their best to bring their dead mother back to life, they went on a journey to find out how to get Ed’s arm and leg back, and his brother Al’s body back which was lost during the transmutation.  They have to go through many trials and face the harshness of life as they travel.  No matter where they go, pain, death or blood-thirsty enemies follow.  They remain vigilant and refuse to give up no matter the cost.  They stick together, fight together, and spend every moment beside one another. 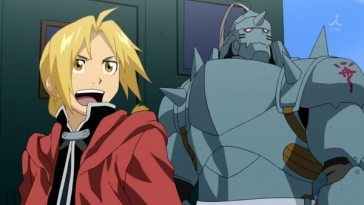 But as I re-watched some of the more important episodes/scenes in the series to do this post, I realized a consistent theme that many of the characters (good and bad) wanted:  escaping death.  If you could boil down FMA to it’s roots and purpose, Ed and Al don’t accept that their mother died and that Al’s body and Ed’s limbs were given in equivalent exchange.  They don’t care how many books they have to read or miles they have to walk, they won’t accept death or no as an answer.  No matter if they have to fight homonculi, other alchemists or chimera, they want to find a way to fix their problems.  They eventually do get Al’s body back and fix some of their problems, but that’s another story and not the point of this post.

Going from wanting to see a miracle to saving countless lives, Ed and Al search for the same thing we all want:  eternal life.  Death is not something we are comfortable with, but it happens to everyone.  It’s not something we want to think about, but you never know when it will be our time.  God says tomorrow isn’t promised (Matthew 6:34).  Unlike FMA’s world, Jesus Christ was resurrected from the dead, and is sitting on the right hand of God (Romans 8:34), and there have been many cases of resurrections happening even after that (Apostle Paul was resurrected from the dead, and there have been many modern day resurrections too!) but in FMA there is no hope for those who have passed on.  Only coming back as evil and twisted monsters that want to be human again (homunculi).

Eternity is something we will all have to face, regardless of what you believe.  God is alive and Heaven and Hell is a real place, not a fantasy nor an imaginary place.  There is no gate as in FMA, and there is no alchemy that can save you.  Trust in Christ, He will bring you peace, since He is the Prince of Peace.  He will give you rest and He offers you forgiveness of all the messed up things you’ve done.

I would love to hear what you thought about FMA, the symbolism behind the anime or any other comments you have about this post.  Also, if you’ve never played it, I left you part 1 of 4 from Fullmetal Alchemist 2:  Curse of the crimson elixir.  It’s an old game, but it was actually pretty good in my opinion.  The graphics and gameplay were fun for it’s era and if your an FMA fan, you will really enjoy it!  You can purchase it here if interested.  Thanks for reading 🙂

I decided to try out the XBOX PC Pass for $1 for 3 months.
Happy New Year! Feliz ano nuevo! I pray this year is a blessing and better than 2020.
Merry Christmas!! Feliz Navidad a todos!
Have you ever struggled with your faith? Had doubts? Church abuse or spiritual authorities living contrary to what they preach?
Got myself a couple new anime blu-rays. #Megalobox and #Clannad which are both very different. Megalobox is a more recent show, and Clannad is a classic among fans. Highly recommend both!
I have been playing through this wonderful JRPG from NIS.
My Tweets