This was one of the greatest RPG’s ever made, and being an avid RPG fan since I was in middle school, I know a great RPG when I play one. I first got into FFX when it came out for PS2, and I had the “Greatest Hits” version. I was playing it at the same time with a few close friends in high school and this game just did things that other games hadn’t at the time.

I’m a big music fan, so when I hear good music in a video game, I’m a little shocked (in a good way) but then also very appreciative that the makers of the game put effort in it. When you play through FFX, you’ll hear beautiful music throughout (to name a few: To Zanarkand, Besaid, Yuna’s Theme) but when you get to one particular scene in the game (no spoilers!) and you hear Suteki da ne, you will become emotionally involved. The beauty of it is amazing, almost drawing you into the moment. 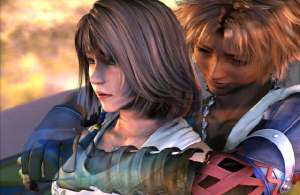 The game is very challenging. If you don’t think so, wait till you get to the end where you can fight the extra bosses and do all the side missions. You can put in over 40+ hours in this game, and any avid RPG player knows that 40 hours is the “average” of most RPG’s, but look forward to about 80 in FFX. Now that FFX Remastered is out for PS3/4, it includes extras from the international version so that’s more hours than the old school PS2 players dealt with.

Looking back at this game and the beautiful remastered version,, I found an interesting article that talked about the role of religion in FFX. I almost forgot that the enemy of the game is Sin, and that the church of Yevon plays a big role in this game.  They control the people by promising that by following their ways and rules, that Sin (the ancient evil that always comes back) will only be stopped if sacrifices are made by the summoners.  If you read the article, it goes into a lot more detail than I will here, but to get to the point of the religious undertones in this game (which is what I want to focus on), religion can be controlling and that’s why people hate religion.  Period.

Tidus and Yuna are a reflection of people who don’t want to follow blindly what others are telling them, they are seekers of the truth.  As Christians or just people that want to know the truth, we have access to find those answers.  If you belong to a church or some kind of spiritual authority, don’t be afraid to ask questions or look for them.  Pray, ask God for direction.  Yuna was stuck in the religion of Yevon, yet she wanted to know why.  Why did the summoners have to be sacrificed?  Why couldn’t Sin be stopped?

After playing to the end, you find out that the person who created Sin in the game, is the one behind the wheel in the first place!  He’s using Sin as a Machina to scare people into doing Yevon’s bidding and controlling the world.  It’s kind of like a “Wizard of Oz” scenario, where we see the big scary face of the Wizard in the machine, but it’s really just a small man in the back running the show.

God isn’t Yevon.  He wants a relationship with us as our Heavenly Father, and wants the best for us.  He isn’t out to “rule the world”, He wants us to live in peace and blessing.

Deuteronomy 30:19
“Today I have given you the choice between life and death, between blessings and curses. Now I call on heaven and earth to witness the choice you make. Oh, that you would choose life, so that you and your descendants might live!

Look to Christ, not Yevon (false religions), to find the truth.  He has the answer to every question you’ve ever needed.  Be like Tidus and Yuna, find out the truth and don’t take “just do it anyways” for an answer.